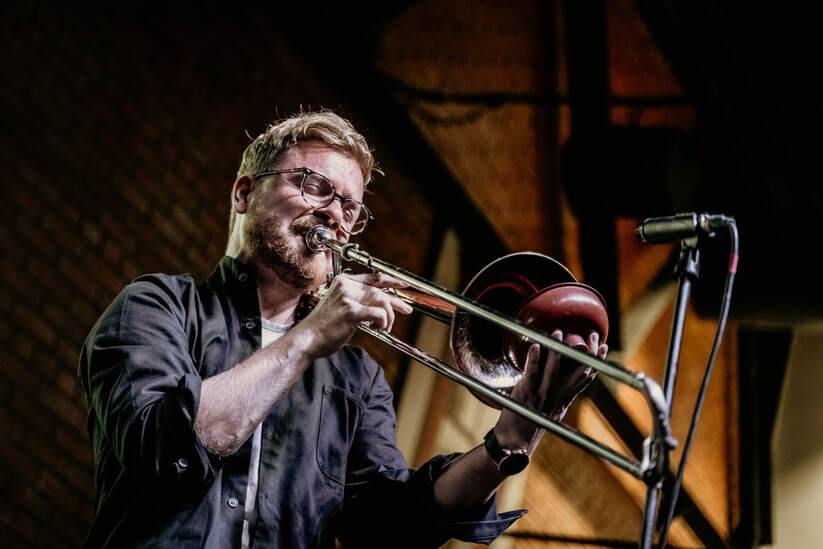 Florian Weiss proves how differentiated the trombone can sound – agile and carefully crafted. He confidently exploits the entire range of his instrument and skillfully emphasizes its lyrical side. Weiss developed his unmistakable style early on in his jazz studies at the Bern University of the Arts, and later at the Lucerne University of Applied Sciences and Arts. There he finished his studies with honors in 2017. During this time he was influenced by many encounters as well as lessons with Nils Wogram, Bernhard Bamert and Bert Joris, master classes with Ray Anderson, Robin Eubanks, Glenn Ferris and also a stay of several months in New York.

Florian Weiss has his very own way of making music: From an inner serenity he develops a dynamic style that stems from astonishing maturity. In vivid and sensitive playing he interweaves stories in his music. Characteristic in all this remains the discreet humor he uses to punctuate the musical narratives and to ensure his audience remains in a state of tense curiosity.

With fellow musicians – Linus Amstad (alto sax), Valentin v. Fischer (bass) and Philipp Leibundgut (drums) – Florian Weiss has created exactly the right environment in his band Woodoism to tell these musical stories. Here, he has formed a sound basis for musical playfulness somewhere between cool and free jazz. Already founded in 2014, this band combines a great familiarity and nonchalance that radiates a remarkable joy of playing. Florian Weiss' Woodoism presents their third album, Alternate Reality, in the spring of 2021, released on Nils Wogram’s label NWog Records.

In addition to working in his own band, Florian Weiss is co-founder of the trio Môme and a sought-after trombonist for numerous other musicians and bands, including Clemens Kuratle’s quintet Murmullo, Fussyduck, the Tome Iliev Quintet, Lina Tinérun or Elian Zeitel. Florian Weiss was born in Zurich and grew up bilingual, speaking both Swiss German and Hungarian. Today he lives and works in Bern. (Isumi Rögner, 2021; transl. by Bruce Carnevale)